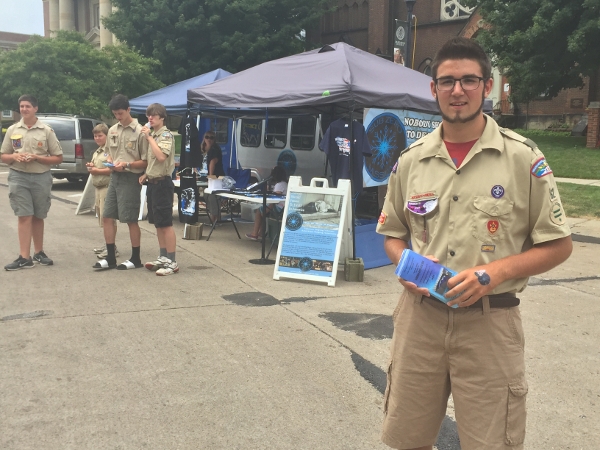 Choosing the right Eagle Scout project can be a little scary, but a Painesville scout chose wisely when he decided to help a local charity. 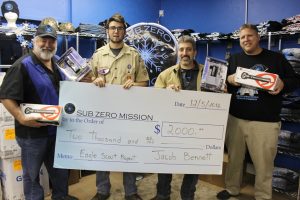 Jacob Bennett presents the check the went towards the purchase of equipment to members of the Board.

Jacob Bennett, Troop 62, created his project to meet and exceed the main requirements according to eaglescout.org, “The Eagle Project must demonstrate leadership of others and provide service to a worthy institution other than the Boy Scouts.” He was advised to choose a project idea which is valuable to the community and a challenge to him.

He chose to help The Sub Zero Mission, a Painesville charity that helps homeless stay warm during the winter months in northeast Ohio and other regions. This organization focuses on finding homeless veterans because the founders are veterans and too many homeless are as well.

Jacob said he became aware of the organization after seeing a news story. “My grandpa was a Vietnam Vet,” he said. “I thought it would be a good way to give back.”

Through organizing events and scheduling volunteers, Jacob made it a goal to raise enough money to purchase new radios and flashlights for the team that heads out on the bus to deliver the warming items. 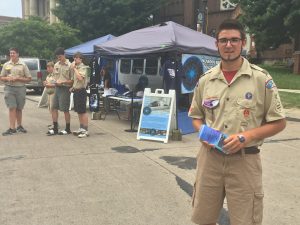 Jacob was extremely active in setting up volunteers for several events. He made sure the Mission’s Painesville Party in the Park booth was staffed with scouts from his troop the entire weekend. He hosted two Stuff the Bus events, a car wash and a golf outing.

But there’s more to a good Eagle Scout project than just raising money or organizing volunteers. It’s what it teaches a young man about life and about himself.

Jacob said he learned about both on this journey. “It feels good to give back. Giving to people who really need it the most is a really good feeling,” he said.

He learned plenty of life’s lessons too. He felt it was great to part of a group. “It was an awesome group to be part of,” Jacob said. “I also learned to be a better organizer,” he added. He feels it will help him as he starts his chosen trade in the HVAC profession. “Maybe even one day owning my own company,” he said.

Board members of the Sub Zero Mission were grateful for what Jacob accomplished over the months he worked with the organization.

Mission CEO Al Raddatz was appreciative in the outcome of Jacob’s efforts. “We now have more safety equipment for the people who do the deliveries to feel more secure when they are away from the bus,” Al said.

Board member Frank Vaccariello knows how tough a good Eagle Scout project can be. “As an Eagle myself, I remember how difficult it was to come up with the right mix of getting something worthwhile accomplished and mixing it with organizational skills and community involvement,” Frank said. “I think Jacob did a wonderful job in creating a project that touched on all of those points,” he said.

Jacob and his Eagle Scout Project, went a long way in helping the Sub Zero Mission in what they do.